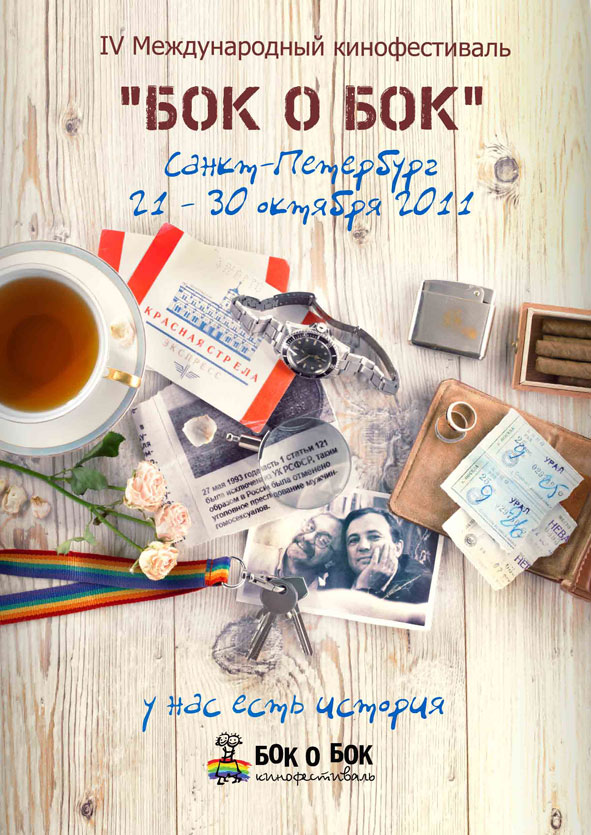 LGBT film festivals are often more than just a bunch of good films, parties and network events. The events are a way to express political statements dedicated to educate, to reduce prejudices against sexual minorities and to protect human rights. Although there have been great achievements regarding equality in the last 20 years, resulting in the expression of different sexual identities and lifestyles as a constant factor/normality of many western societies, one can’t forget about the many countries where these developments are still in an early stage and homosexual people still have to fear persecution. Russia is a good example.

Only a few years ago, in 2008, Side by Side initiated Russia’s first LGBT film festival, a unique, historical, groundbreaking event, which aimed to challenge the widespread intolerance, prejudice and violence directed at sexual minority groups, commonly and openly expressed within Russian society.

During its young history the Side by Side festival had to face several restrictions by the Russian government that used threats, compulsion and blackmailing to disrupt the festival.

FilmFestivalLife used the 4th edition of Side by Side, held in October 2011, as an opportunity to interview festival founder Manny de Guerre. We had the chance to talk about Side by Side’s work as a cultural and social institution, the latest impressions from the festival and also about the role of social media in politically restricted countries.

FFL: How would you describe the role of Side by Side in Russia and its development?

MdG: Since the foundation of Side by Side (…) the breadth and scope of the organization’s work has markedly expanded. Activities, presently fall into three main areas: the annual week-long LGBT film festival in Saint Petersburg, multi-day LGBT film festivals in cities across the Russian Federation and a series of stand-alone special events consisting of screenings, discussions and workshops on a variety of human rights issues and debates relating to LGBT (…).

Since October 2008, 10,300 people have attended our events and over 18,000 information brochures on a range of topics including coming out (of the closet), homophobia, transgender, LGBT parenthood, homosexuality and religion have been distributed.

Side by Side has successfully carved out a space for the discussion of LGBT issues and rights in the public domain. We are maintaining and extending our profile as an active organization promoting LGBT rights, being seen as an integral and necessary part of the wider LGBT and human rights movement. Side by Side has growing audience figures and commands a reputation for holding interesting, enlightening and professionally organized events. Gradually Side by Side is becoming part of the cultural landscape in Russia.

FFL: What was the 4th Side by Side like? / How was the atmosphere?

MdG: It was a big success on many fronts. We welcomed over 2000 visitors and all screenings and discussions were extremely busy. We showed films from all around the world and tried to give a broad representation of LGBT films. The festival was held in leading venues including Mirage Cinema and Angleterre Hotel. We also got the chance to win new prominent business and information partners, which strengthened the image of Side by Side a lot. Unlike the years before there was no opposition voiced from local authorities, religious orthodox or nationalist groups. The atmosphere was friendly, open and positive.

FFL: Did you have special guests or highlights?

We also launched the new event format “An Evening with a Star” whereby the audience had the opportunity to join the British performer Marc Almond in conversation after the screening of his chosen favorite film Victim (1961, UK, Basil Dearden).

FFL: How did attending patrons and filmmakers experience the festival?

The program gains high ratings among the visitors. In our survey we got really good feedback like; “I love the collection of films from the festival. I know that 90% of them I wouldn’t be able to see anywhere,” (age group: 20-29, gay, Saint Petersburg) OR “The films not only open up issues but are themselves interesting and are of high artistic quality,” (age group: 20-29, bisexual, Saint Petersburg).

FFL: What was the feedback of the media like?

MdG: The media attention we had was neutral to positive in tone. Press censorship is being practiced in Russia and editors are very reluctant to cover positive news about LGBT events. The participation of Marc Almond helped to break the silence a little and we were able to gain more presence in the media.

FFL: Which role has Social Media for promoting Side by Side?

MdG: As I mentioned, press censorship is still actual. Internet and social media are therefore extremely important in spreading the word about the festival.

In the past we also had to deal with unpleasant incidents during the festival time and were forced to change schedules and venues abruptly. In order to keep the festival going we used social network sites and SMS messaging as well as word of mouth to inform the attendees. That made it possible to continue the festival with almost no restrictions for patrons and filmmakers.

FFL: Which Social Media channels do you use and why?

In Vkontakte we have a main page of 5.000 members, and have pages especially for the regional festivals. Through Vkontakte we are able to invite people to events directly. This tool has proved its effectivity by increasing the numbers of visitors. Live Journal is also important for getting news out to people providing them with photo reportage of events and reviews.

A lot of our events, discussion etc. are filmed. This material is made available both on the website and YouTube. Our videos have been watched over 20,000 times.

We also had a trailer that circulated successfully through the Internet (English Version here).

FFL: What is the response of your community like (regarding your social media activities)?

MdG: On the whole it is very positive. The Internet is a resource being used by the younger generation and makes it very easy to reach this group. The older generation is not so computer literate. Therefore, it is important not to forget this group of people and to continue using traditional methods of advertising and marketing like postcards, posters or by sending out press releases to journalists.

FFL: Are you planning to use additional social media channels, or initiate other online activities?

MdG: Yes. This year we used Twitter and Facebook more actively. We will take a look at the results in the coming weeks and see where there is room for improvement.

There is also the idea of an online screening in the pipeline. At the end of this year / early next year, we hope to launch a „film of the month section“ where our visitors will have the opportunity to watch a selected LGBT movie via stream.

FFL: Do you already have concrete plans for next year resp. which cities Side by Side will travel to?

MdG: Yes. We will hold special events in all cities and the multi-day film festivals in Novosibirsk, Kemerovo, Tomsk and Archangel. We are considering holding an event in Moscow and are at present in the early stages of organization.

FFL: What do you wish for the future?

MdG: To keep bringing LGBT films to broader groups of the population, continue to breaking the silence on LGBT issues and rights and increasing tolerance towards LGBT in Russia.

FFL: Do you have a message for other festivals in similar situations like Side by Side?

MdG: Keep persevering in the face of opposition.

Just before publishing this interview worrying news reached us from Manny de Guerre. It proves that there is still a long way to go until LGBT can be freely chosen as a lifestyle in Russia:

At the moment the LGBT community is under threat from the authorities in Russia. Vladimir Putin’s party United Russia is preparing to introduce a homophobic law. On Nov 16 LGBT and human rights activists gathered in front of the Saint Petersburg Parliament to protest against the possible introduction of amendments that would equate homosexuality, bisexuality and transgender with pedophilia, as well as impose a fine for public discussion of LGBT issues, treating it as “propaganda.”

The proposed amendments violate both Russian and international law, as well as the European Convention of Human Rights. The adoption of this law will have a detrimental effect  on the whole of the Russian LGBT movement.