SUNNY isn’t the sunniest of flicks, but it’s a bona fide festival smash – that’s what! Here’s how ‘SUNNY’ became a festival hit… 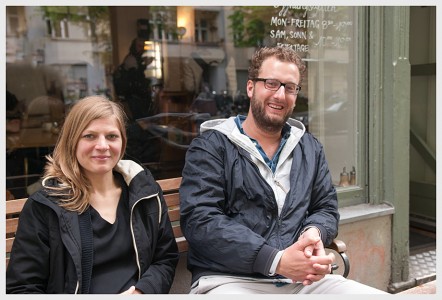 The story of an 18-year old father, Hajo, who has a new-born baby and is struggling with the transition between adolescence and adulthood, with potentially disastrous results. After winning the 2013 Deutscher Kurzfilmpreis and its premiere at Petaluma International Film Festival, it’s been screened at FFL festivals achtung berlin – new berlin film award, Landshut Short Film Festival and Filmfest Dresden. That’s a festival run to boast about already, and it’s not about to let up…

We met with Director Barbara Ott and Producer Simon Rühlemann to talk about their festival breakout success, over some famed Five Elephant cheesecake in Berlin, and found out more about how they strategized their film festival success.

How does it feel to have had so much success?

Simon Rühleman: For SUNNY, we won the First Steps Award for upcoming filmmakers, and then three or four weeks later the Deutsche Kurzfilmpreis. That’s two awards before we started with the festival career too!

B: You can’t plan this. It’s just luck, and timing.

Where do you see SUNNY going?

S: It could be quite hard to get into big international competitions – as we don’t have premiere status anymore. We hope we get invited to festivals, but with the regulations, it could be hard.

B: But we tried it! We didn’t get into Sundance, Cannes, Locarno, Rotterdam.

S: We are in contact with a sales manager, to maybe get SUNNY on a DVD. Maybe a DVD sale with one of the other short films. We have DVD’s just for entries, and for distribution at the moment.

B: At this moment we are totally happy with our festivals, and we have one year left where we can submit…we have a long festival list.

How did you choose the festivals you applied to?

S: In the beginning, for every festival, the main thing we talked about was entry fees…

B: …except the A festivals!

S: After that, we are focusing a bit on the festivals. Is it classified? Are there monetary prizes?

B: I don’t mind if it’s small, the 3rd festival or the 55th festival – it’s just great to spread the movie!

What is your favourite festival?

B: Hofer Filmtage was great, also Achtung Berlin. I like small family festivals, cozy, where you meet the people and you have a good time and get to know them. Like the Frontale Film Festival at the Wiener Neustadt, just 40km away from Vienna. Very, very small, but I loved it. There was no festival I could say I didn’t like.

Have you got any advice for filmmakers in the process?

B: Most of the short film festivals have regulation length restrictions of 30 mins – so stay under 30 mins! You should keep to the regulations so you have the most possibilities.

S: There’s also the middle length between 40 mins and 87  – under range of feature film but not short. Even smaller amount of festivals to choose to enter.

What do you think of crowd funding?

B: We did it. For a few things: for submissions, to print posters, to pay the sound designer, for some post-production stuff.

S: It’s a great way to move your film forward. There’s first of all the Facebook site and then crowd funding brings publicity. It’s not just the money, it’s also the to give people in production their first look at the film!

You mention your Facebook page. Is that also necessary?

S: We started the Facebook page a few weeks after finishing.

B: It’s good to have one when you have a bit of success!

S: You can also build a website or Tumblr but the easiest way is to have a Facebook site. It’s like a newsletter to keep everybody informed, with the dates for the upcoming month. My advice? Make one when you finished the shoot!

S: It’s much easier than Withoutabox! Everything is on the site and it’s great!

Do you prefer online submissions or DVD’s?

S: When my internet connection is good, online! Sometimes it however can half a day to get something uploaded.

B: I prefer the old school way – I hate sitting in front of the computer! I don’t believe in it, in some way. It’s more secure if I just send a DVD – sometimes I still send it afterwards! It will change in two years or so. It’s more expensive to do it the old school way, however.