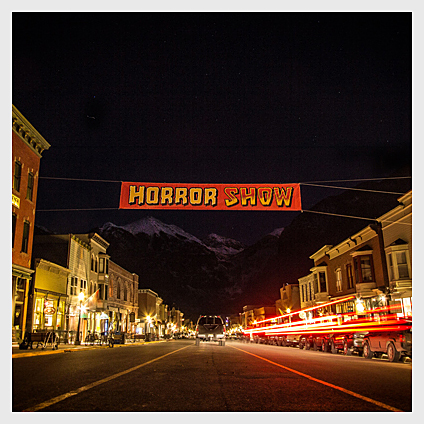 ‘We’re a horror film festival, with great taste.’ When it comes to the theme horror, Ted Wilson knows what his audience wants. Over the last five years, Telluride Horror Show‘s Director and Founder build a festival that doesn’t have to hide behind the big Telluride Film Festival or the well-known Mountainfilm in Telluride.

Named as one of the ‘13 Horror Film Festivals to die for’ in 2011 by MovieMaker Magazine, the FilmFestivalLife festival has grown into an event to definitely take a closer look at. We talked with Wilson about his three-day festival, the importance of genre film festivals and why filmmaker should submit their scary and dark films to Telluride’s top-notch horror film festival.

Horror and its countless sub-genres. And thriller, dark sci-fi, dark fantasy. Anything dark! Especially dark comedies…my personal favorite. The Telluride Horror Show showcases an eclectic mix of films every year that shines a light on the broad interpretation of horror and genre films.

Why should filmmakers submit to Telluride Horror Show?

What can a filmmaker expect when they are applying?

We watch every single film submitted to us, start to finish – that’s saying something in the film festival world. So every film is given fair consideration. Accepted filmmakers are given not only exposure at an US festival with attendees from all over the country, but we do help filmmakers attend the festival by providing free lodging and passes to offset travel costs.

What trends do you see in the horror genre?

The trend we’re seeing this year is the incredible amount of talent and investment in short horror films. Some of the shorts we’re screening have the budgets of feature-length movies and the stories to boot. The programmers at the Telluride Horror Show have always had a soft spot for short films and every year we have three to four dedicated shorts programs that pack the house – our attendees love them too. So it’s especially exciting to us to see the caliber of short films skyrocketing.

Why do you think we need genre film festivals?

Yeah, there are a gazillion film festivals these days… I think genre festivals are the best because they give fans of genre a place to come together and spend a long weekend with like-minded people, enjoying and discussing and celebrating the world of film that they love. For a filmmaker, having your film shown in this ultra-friendly environment? Priceless. Not only are you building exposure for yourself, your film, and your career, you’re building an audience, and an appreciative fan base.

Why do you think filmmakers should submit online – through FilmFestivalLife?

Three words: Quality online screener. The built-in screener on FilmFestivalLife’s submissions panel is a good quality and that helps the tired eyes of programmers who have been sifting through hundreds and hundreds of films. So, from a practical tech viewpoint, FilmFestivalLife has a great site.  All the film info, contact info, festival history, etc. is viewable on one screen, so it’s great to have everything in front of you when you’re a programmer. And also the people at FilmFestivalLife seem pretty damn nice… Worth supporting!

One thought on “The Telluride Horror Show: A Festival to Die for”