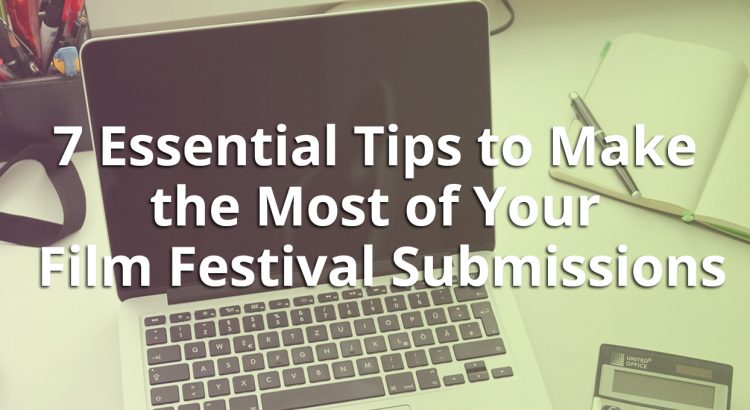 In order to help you untangle the tricky business of film festival submissions, we’ve collected the best tips we’ve gathered over the years from talking to the people who really know best – the festival directors and programmers.

So, what now? Move on to the next one?

No. Your job isn’t finished here – this is just the start. It’s time to enter into the jungle of the submissions biz.

Everybody wants their film to be watched by as many people as possible. Why else did you make films? And one of the best ways to get your film out there are still film festivals. So, filmmakers take your notebooks in one hand and your film in the other and start your FilmFestivalLife.

The images don’t have to be slick or printed on glossy paper, but they should be of high resolution and offer an accurate representation of the film. Good quality images are really useful for the subsequent marketing and publicity campaigns – a good image will be used everywhere!

Be mindful of opening credits… very lengthy credit sequences are generally hated by programmers and jurors as they take away from the story telling, for the most part, and delay a short films narrative. In a 10 minute film we do not need a 2-3 minute credit sequence! Be concise and precise in telling the story.

Have a look at our previous programmes – look at the type of films we select and decide whether your film fits that mould. We’re pretty broad in our tastes, but there are certain, more commercial forms of short film which rarely appear in our programme.

Read the regulations! The submission process takes time – not to mention money – so making sure your film is eligible should be the first thing you do.

‘A‘ film festivals are definitely important because they act as the foundations for the film industry, where you can make excellent contacts, and see the big dogs – they are important to give us general and global insights on the film market. But at the same time it‘s at the small festivals that you get closer contacts. In smaller festivals films are treated almost like their babies, which can help make going to a smaller festival a far more interesting experience. For sure, if you go to Cannes or Berlinale, it‘s great for CV purposes, that’s how the industry works… It’s easy to feel completely exhausted in this gigantic slaughterhouse of industry and films and distributors and filmmakers. When you are at smaller festivals, it‘s a lot more familiar and you are in much closer proximity to everything and everyone.

We believe that there is a festival for every film, so first of all don’t go crazy if you’re not selected. When we finish watching submissions, our short list is far bigger than the 70-something competition films we have each year. We’re also very supportive of filmmakers selected to our festival. We use our networks to help them get selected at other festivals and we suggest films to friends from other festivals for example.

:: SYDNEY FILM FESTIVAL On The Berlinale, The Netflix Impact and How To Get Selected
:: Glasgow’s Matt Lloyd: Festivals are no longer the Gatekeepers for Emerging Talents