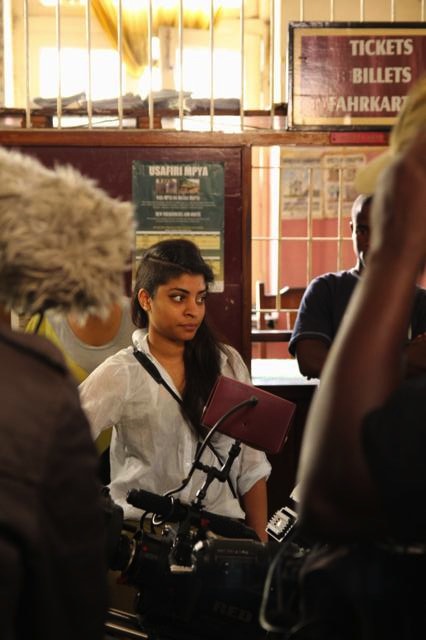 It is Berlinale time and FilmFestivalLife would like to introduce you to one of its Talent Campus participants Amirah Tajdin. The 25 year old filmmaker was originally born and brought up in Nairobi, but spend her teenage years in Dubai. She is currently working on her first feature length film after completing her short film in Nairobi, which is titled FLURESCENT SIN and is about a drag queen having a nervous breakdown. Her ungoing interest for uncoventional crazy cities and her mixed lineage is of great influence in all her creative works. Besides making short films, Amirah draws, dj’s, creates wall murals and sculptures. A busy bee on an artistic level!

I write and direct, but to elaborate… Human stories. I love social misfits and exploring cliche’s and trying to re-present them to the world. I am relatively new to the film industry, but have been exploring these themes through my photography and video art over the years. I like fiction and the element of playing and pretending on the silver screen. I would like to get into creative documentaries one day too. When the time is right!

You have a bachelor in fine art, Photgraphy. Does photography influence your filmmaking in any sense?

Immensely. I never wanted to go to film school, as I found all the courses too technical and textbook oriented. So being an artist first, I decided to develop my conceptual eye and narrative skills through a fine art route – although I majored in photography, I must also give props to all the hours spent in drawing, sculpture, printing and painting –  which all together I feel have completely influenced how I respond to imagery and create it. A big perk of majoring in photography was my understanding of light, which is crucial to weaving a story together. The mood, aesthetic and tone of light is so important.

You are both screenwriter and director. How do you combine these functions?

Sometimes I don’t! Just kidding. It’s hard at times, but my narrative is  intrinsically tied to my visual understanding of the world. I’ve always slapped words against my photographs and I’ve been creatively writing since I was much younger, so for me they come hand in hand. What I see in my head is what I try to put into words and I feel the combination of the two help me articulate my stories onto screen in as precise a manner as possible. I get very nervous when people read my words, more so than when they see my images.

Are you planning to continue this multitasking for future projects?

I would like to. The next two projects I have on the slate include me both writing and directing. I might ask someone for help though. One of them would be my first feature length film. But we’ll see how it goes.

Like I said earlier, I’m new to the industry and haven’t frequented too many festivals to safely say what my favourite one is, but of the 3 I have been to, Dubai International Film Festival is up there. Plus I have an affinity to it that dates far back.

How high do you value the importance of film festivals, and why?

They’re incredibly important! The networking and access one has to films and industry heads is almost as necessary as having a laptop to work from! The laid back atmosphere at most of them also makes the film industry seem a lot less intimidating, which it can be to the outside world. Some of my most valuable friendships have been made and found at film festivals.

Advice to other filmmakers when attending film festivals:

Go along for the ride, go to as many parties as you can, carry lots of business cards and don’t be intimidated to approach anyone. They’re all there for the same reason as you, love of cinema.

How is the film festival climate in Afrika? Did you have any personal experiences there? If yes, is there any difference compared to festivals in other parts of the world?

The only African film festival I’ve attended during my short career as a film maker to date, is the Zanzibar Film Festival. It was a super chilled, relaxed atmosphere that made having a drink with Nick Broomfield seem like an everyday occurence with friends. The festival blends island life, african hospitality and an incredible sense of history. It’s almost bizarre.

In what way do you think festivals are important for connecting different cultures?

Well, festivals definitely do bridge cultures and people from all walks of life. Most of the time you won’t always have a posse to travel with to the festivals, so you are really forced to make friends. Since everything and everyone is so accessible the process is pretty easy. And of course by watching the films, you find out so much about filmmaking and you have access to films you’d never have the chance of watching at your local cinema. You meet actors, directors, producers with all such different backgrounds. You’re constantly reminded that the world we live in, is indeed a village, at least at film festivals.

One thought on “Amirah Tajdin • INTERVIEWED”