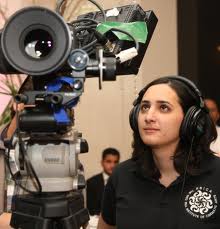 Meet Deema Amr, a young Jordanian filmmaker. After attending New York Film Academy, she has worked for various film related organizations such as the Royal Film Commision – Jordan, Walk film festival and Casting Jordan for which she was the managing partner. After graduating from the RSICA Red Sea Institute of Cinematic Arts in Aqaba, Jordan, Deema finalized her first feature film A 7 Hours Difference in 2011. She belongs now to a new generation of upcoming female Arab directors.

Being the screenwriter, director and producer it was an intens project for her. The film, in which Deema tackles the social pressure woman are facing in Arab countries, was very well received during Dubai International Film Festival. It tells the story of Dalia, a college student in the US who returns home to Jordan to attend her sister’s wedding but the celebration turns sour when her American boyfriend turns up in Amman unannounced….

We’ve asked Deema a few questions about her work and film festivals.

Telling stories that can inspire change in perception in my community and the world. I believe that media in all its forms is the strongest tool to make a change. And a change for the better is what I try to achieve and hopefully do.

You are a screenwriter, director and producer. How do you combine these functions?

I first allow myself to write freely as a writer would without budget or time constraints or shots and floor plans, just simply let the story take me. Once that stage is done, I then take it in as a producer and director, having the knowledge of all three roles, I intertwine them to come up with a recipe that works as much as possible for the writer without compromising the story, for the producer with the budget available, and for the director to create a wonderful vision.

In the case of A 7 Hour Difference, the script was first written to partly take place in Boston, then Jordan. When the time came to produce and direct, we had a small budget that there’s no way we could’ve shot anywhere outside of Jordan, so then I shifter the story, without losing its essence to take place fully in Jordan..

Are you planning to continue this multitasking for future projects?

I would like to try and NOT multi task. I think it would be great to enjoy one role at a time. However, the industry in Jordan is still very new, and we’re all independent filmmakers that have to multi task to get the work done perfectly.

Dubai International Film Festival.. It was a great experience!

It’s very important!!! It is at the festivals that you as a filmmaker feel you’re not alone. Also, this is the only chance to meet so many filmmakers distributors, programmers, sales agents, and have the chance to showcase your film to audiences so different from where you come from.

Be fully prepared, know who’s attending, set your schedules and agendas months prior, so you can really utilize every opportunity provided.

How is the film festival climate in Jordan, or as you favor the DIFF, in the UAE ?

I wouldn’t know how it is in other parts of the world, as I still didn’t experience it. But for example, when we had a very private screening in Amman – Jordan for our film A 7 Hour Difference it was shown on a weekend night and a small number of people came only. In Dubai, the film was also shown on a weekend night and it was a sold out show. I think this festival is doing a great job incorporating the culture of film into the general public and film enthusiasts.

You have been actively involved on an organization level for Walk Film Festival. Does this support the approach of your own festival career, because you understand better what a festival wants?

I was more invloved on the development side of Walk Film Festival. The team would pick winning scripts and produce them. Due to lack of funding, the festival terminated after two rounds. the experience I had with “The Walk” was very very different from DIFF.

In what way do you think festivals are important for connecting different cultures?

I think film festivals play a vital role in connecting different cultures. If I just rely on distribution, my film may never be viewed by a South African audience for example. Festivals make this possible. because you watch films from all over the globe, and your film is being watched by audiences from all over the globe. It’s crucial in that aspect.