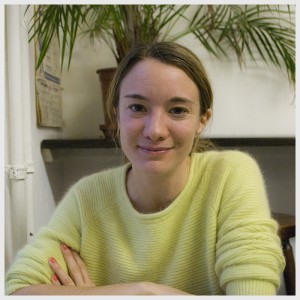 She premiered at Hof with her award-winning debut DANCING ON AND ON (Weitertanzen). She won the Eastman Award for young talent in 2008. Her second feature SUMMER OUTSIDE (Draussen ist Sommer) got a shot on the international parquet, premiering at ‘A’ film festival San Sebastian this year. She is Friederike Jehn, German filmmaker whose name is hot in the German press this year and on the lips of major festival execs throughout the world as the new German director to watch.

We were introduced to Jehn following the Berlin premiere of SUMMER OUTSIDE at Around the World in 14 Films this year. The film is about the decay of a family from the perspective of a 14-year-old daughter, played by Maria Dragus (The white Ribbon), who tries everything to safe her family.

She sat down and spoke with us about the film’s festival run and some of the major learnings along the way.

Trust your instincts and learn from your first steps.

‘For your first film it is important to trust yourself and what story you want to tell. Don’t let other people push you in a direction where you don’t want to go. Dramaturgical support is important, but you should listen to your inner voice.

From DANCING ON AND ON to SUMMER OUTSIDE I don’t feel we did so many things differently in terms of the distribution. Both times, we used German Films as a vehicle to access the international circuit. If you want an international premiere, I feel there are really not so many other choices – as a German filmmaker you should go to German Films. It is super – this system works for me – it means they do all the distribution work.’

‘The film festivals you submit to need to follow some type of strategy. Usually the process is just continually submitting and waiting until a festival says ‘yes’. If your film is ready in the beginning of the year then I think most of the European filmmakers try to pitch to Cannes. The time of the year your film is finished always has a lot to do with what film festivals you pitch to. If its ready in spring, you will not wait for the Berlinale for example. I don’t know any filmmakers who would wait almost a year for it.

Where you submit has also to do with how you see your film gaining the most amount of exposure. You have to think about things like whether to have your premiere at a big festival in the side program or at a smaller festival but in the main program. Fortunately, I didn’t have to make these decisions because it all run itself, but usually you have to take these type of things into serious consideration.’

For me, German Films is a great partner for any German director looking for support to submit abroad. You simply submit your film and they invite programmers from important festivals like San Sebastian and Locarno and run private screenings. They have great connections and a well rounded knowledge about the international festival circuit. The Managing Director Mariette Rissenbeek knows a lot important people and she is always travelling around to be at the most important events and festivals.’

Know what the producer’s job is.

‘I know I am very lucky to have a production company managing all of the submissions. It has saved me a lot of time and stress. I feel that is more reputable if a production company is behind all the submissions. Of course you are always looking for prestige festivals like San Sebastian especially for your premiere but generally we decide together where we should submit and discuss honestly whether we have a good chance.

If you have a production company on board however, I feel you should always make sure you are up to date with their proceedings. Always give them a call and keep them ‘on their toes’ asking: have you already submitted? If not, when will you? How can I help move it along faster for you?’

If there is a state or federal funding system – use it and keep trying.

‘The first production company that I worked with – Polarlicht – a Berlin-based company, offered me a directing role for the script written by Lara Schützsack. We tried to get funding for the project but it didn’t work out to be an easy task for a production based in Germany. We were able to access funding for the script development but not anything else. Eventually we received two grants in Switzerland which would enable us to only produce it there but it was not enough for the scale of the production we wanted.

In the end, the production was given to another company in Baden-Württemberg named Zum Goldenen Lamm. As a much bigger collective, we were successful with funding in Germany from this point on.’

Understand the importance of film festivals.

‘I think festivals like the Around The World In 14 Films are very important because they can reach new discerning audiences. Berlin offers many really different festival experiences like Around the World in 14 Films, Berlinale and Achtung Berlin, all offering such very different rewards to filmmakers, but all great for their own reasons.

Then, when you go to the smaller German cities such as Lünen or Hof, you begin to see a whole different tradition in festivals, with very audience focussed festival programs and an entirely new way of experiencing films.

Either way, I think festivals play a very big role for the existence of cinema and they get the people back into the cinemas.’

Seek out sales and distribution people at festivals.

‘My premiere in San Sebastian was very important for my career. There were a few world distribution companies there who liked my film, but they couldn’t offer me anything for this film in particular but are looking forward what I am doing next. This is important- the conversations. The sales and distribution companies coming to get to know your film – even if it isn’t an immediate negotiation. It is about the small steps forward and the long future ahead.

You can use the festival as a meeting place for sales agents. Use the international markets to meet distributors. We found a French distributor in San Sebastian. It is not yet signed, but it looks quite promising. Without these talks at San Sebastian, I do not know if that would have been happened for the film’s future.’

Understand film festivals as a place to meet other filmmakers.

‘The most exciting part for me about festivals is that you can meet other directors from different cultures. One of my favorite film festivals is the Gijon Film Festival in Spain. The guest relations was always great at any of the festivals I went to, but at Gijon it was really special. The festival team tried its best that you were never alone in the evenings; you always had a possibility to join a group and meet the other filmmakers. It was always a colorful group too; I was sitting next to Carlos Saura! I was there with my short film SCHLÜSSELKINDER and it didn’t matter whether you had a short or a feature, you just had a nice time with nice people from the industry.’

Friederike Jehn’s SUMMER OUTSIDE will be in the theaters in Spring 2013. Next festival: Solothurn Film Festival in January, 2013.

One thought on “Friederike Jehn: How ‘SUMMER OUTSIDE’ helped shine her career internationally”