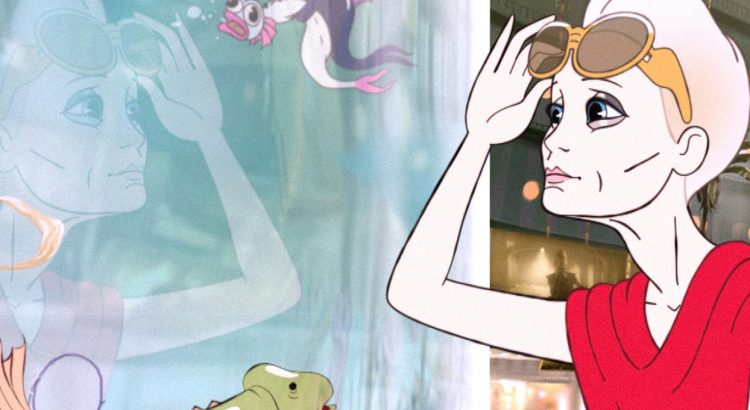 Opening the Directors Fortnight section in this years Festival de Cannes with its world premiere Wednesday 15th May, the film is stirring serious but varied criticism on the Croisette. We sat in on the screening and the Q and A, only to find ourselves increasingly enrolled by his fearlessness to take on the industry so aggressively in this stage of his career.

Placed within a gridlock of post-success pressure, Ari Folman has formed the very antithesis of the expected follow-up feature to WALTZ WITH BASHIR. Anti-Hollywood, anti-technology and generally anti-humanity, THE CONGRESS has defied standard industry practices typical to the ‘film after the first major success’.

Upon its release in the Cannes Competition in 2008, WALTZ WITH BASHIR dominated the international festival landscape, winning awards from screen to screen, landing a nomination for Best Foreign Film at the Oscars and winning the same category at the Golden Globes. The time immediately following his success, was perhaps, one of the most fragile periods of his career. Collaborators, producers, funders and audiences have all been waiting for the next incarnation of his last film. So, what are some of the newly introduced choices filmmakers are faced with when planning their post-success film, how did Folman face these choices and how can filmmakers learn from the ‘Folman way’?

“Nothing really happened. It was just a blink. I was flying there [the Oscars] first class, coming back on the last row…”

Once you have a major success you are ‘noticed‘ and the rest of your career, or at least your next film, will be somehow easier; more prestige, more money, more opportunities.

“Unfortunately it hasn’t changed my life at all. On the way back from the Oscars I was flying economy class from LA to Tel Aviv and I was sitting just around the toilets, squeezed between two very fat people. So I went straight back to my good old life, nothing changed man. It was really tough raising the funds to do this film. Nothing really happened. It was just a blink. I was there flying first class, coming back on the last row. This was it.”

You should then use this successful film as an anchor to the next, building your directorial fingerprint right from here, keeping risk-taking at a low.

“After coming here with WALTZ WITH BASHIR five years ago I knew, especially after the films journey, I wanted to go as far as I could from WALTZ WITH BASHIR. It was tough, especially traveling with the film and sci-fi is my favorite genre of film so I came back to the novel and I feel lucky that I could adapt one of my idols and one of the master sci-fi writers ever.”

Your film should extend the style introduced in the previous film, expanding on their initial aesthetic but always giving audiences more.

“We had a very long suffering time trying to develop this film and animation and in the beginning I think that me and the crew were a little bit caged with the success of BASHIR so we tried to make cutout animation like we did with BASHIR and basically it was a nightmare. We all suffered, especially the animators and we were all looking for something completely different. We made a very tough development with cutout and we threw it away. We were searching for something that we hadn’t experienced and to try something new and we decided to, in a way, give a treatment to the Fleischer brothers on the 30’s on the first world of Popeye, Superman and Betty Boop and to go really backwards, classic and hand made animation. We put it in contradiction to everything that is being done now with 3D stereoscopic animation which I really don’t like that much and the people who work with me feel the same. So it was a kind of statement but since we have never experienced the classic animation it was a very tough mission.”

“Because of the European system of financing, we had to spend money where we raised it so basically we were having six studios in six countries working in animation: Israel, Luxembourg, Belgium, Germany, Poland, Netherlands. We exploited the entire United Nations system with the Philippines, India, you name it.”

Exploit business contacts made in the previous film: imitate your marketing and distribution strategy and build media and industry support through following a similar film festival path.

This is yet to be confirmed following Cannes but Folman seemed to travel the standard way here. Like WALTZ WITH BASHIR, THE CONGRESS was set to premiere at Cannes, but wasn’t accepted into Competition, stimulating a wave of discussion through the industry. Whether this is due to his straying so far from the film that put him on the festival map, or due to reasons more intrinsically involved with the film itself, are left for reviewers and audiences to work out.

Criticisms of THE CONGRESS have been varied but all share a commonality: the mania so representative of a filmmaker’s film post-success. ‘THE CONGRESS has simply too much in it. It feels a little like a second feature, even though it isn’t — overloaded with too many ideas…‘ said Jessica Kiang of Indiewire, and ‘Folman’s film is a queer fish indeed; the director’s equivalent of that difficult second album’ said Xan Brooks of The Guardian. Altogether, whether THE CONGRESS did it the ‘right way’ or not, it is undoubtful the great effect of WALTZ WITH BASHIR, the great success prior to it had on it’s production, distribution and reception.

And what did we think? Through LCD-laced spectacles, I saw more truth bursting through the screen than what is typical at festivals, certainly Festival de Cannes. Unaffected by ego following BASHIR’S success, it seems almost Folman has done everything we expected he wouldn’t, standing on the outside, speaking to us his darkest industry secrets camouflaged in this colorful surrealist spectacle. For me, the question lies ahead: With the antagonist of THE CONGRESS being the Hollywood distributors ‘Miramount’, what distributors are going to take this film to the world’s cinemas?

In Folman’s words himself “It gives you incredible freedom but the craftsmanship is tough as hell. You have to be either stupid or brave to do it, probably both.”

:: EVA STOTZ and her GLOBAL HOME: The Festival Circuit with a Couchsurfing Documentary
:: How to’s of Distribution with Beast of the Southern Wild’s Philipp Engelhorn