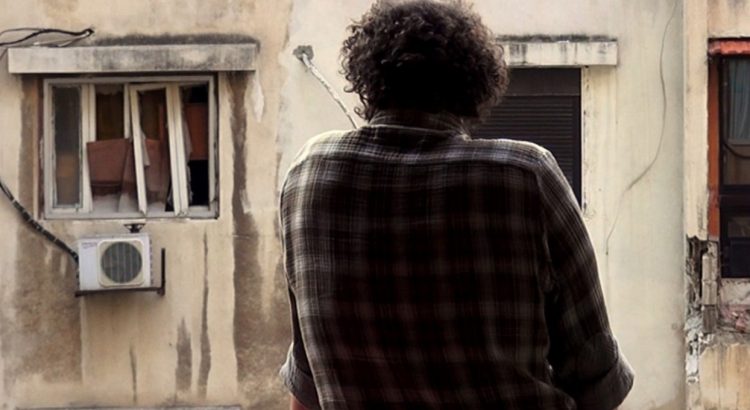 With its 8th edition, the prestigious Doc Alliance Selection Award moves to Locarno, Switzerland. There, one of the seven directors nominated for the award designed primarily for emerging documentary talents will receive the award on August 8. With her debut HAUNTED, Syrian native Liwaa Yazji enters this year’s competition.

Read about the success of her film as well as about her creative path towards documentary in DAfilms.com guest interview with the director!

Andrea Průchová: Dear Liwaa, we are happy to welcome you and your work at DAFilms.com for the first time. It is a special occasion for us because of the nomination of your film HAUNTED for the Doc Alliance Selection Award 2015. HAUNTED won Special Mention of the First Film Prize at FID Marseille last year, now you have an opportunity to win another internationally recognized award. How do you perceive the journey of the film, what were your ambitions regarding the film at the beginning of its shooting?

Liwaa Yazji: I am happy and proud to be in this award, and I think it is a very special opportunity HAUNTED will have. I would like to thank all those who were parts and reasons that the film reached here. When I started working on the film, frankly, I was not thinking of the coming steps or the journey that it will take. I was more indulging in the film itself and the challenge to prove that we can talk about war from a different point of view. I was sure that this angle the film tackled is quite important and able to reflect and express what was happening and this is what I was betting on. Yet, also working with tools available and possible inside Syria at that time made my bet even more challenging and difficult.

When the film was over and I finished being solely driven by doing it the way I wanted and believed, I hoped then of course that the film will have its chances in screenings and taking the needed journeys and trips; for me as a director who is working on a film… very simple, yet as well for the Syrian cause itself and the representation of Syrians in the world. I feel that I have a double mission and I will be proud to accomplish both of its elements.

The film represents a very intimate topic of exile, specifically the moment of making the decision to leave home. It follows nine stories of this inner difficult struggle in the context of the Syrian war. What was the first impulse to start to speak about this topic? Based on what criteria did you choose the main characters?

The motive was quite personal; I found myself bare and surprised facing it personally. Seeing all those displaced within Syrian cities, news referring to increasing numbers of Syrians escaping the country, images saturating media screens of destroyed houses (with very shocking details showing to the streets) etc. Starting from the end of 2011, whenever-wherever you go or whomever you meet you will find this topic present directly or indirectly: what do we do next? What do we do if we are faced with the same destiny? It was very possible; rather expected.

For Syrians, like maybe all other people, the idea of home is very essential and crucial. The Syrian citizen pays almost all his life (even literally) to get a house of his/her own, and it is the very first thing he/she loses with any instability. Home was – during that period – manifesting itself in various concepts, meanings, symbols and definitions: it was linked with all life savings, history, memories, identity, meaning of past life itself…etc.

I started to hear various unbelievable stories about how people are reacting to this question of home; how they are dealing with the fact that they should leave, that they lost their homes, that they might any minute be left on the streets or even change their status from citizens to refugees!

The stories were painful and most of the time surreal, yet some people still maintained sometimes this black comedy sense of expressing what is happening with them.

I went into a scouting period of collecting and archiving as much as I can from these stories; whether I documented them verbally or visually. I went into this frantic process of collecting those stories. Then I started to think of the structure of the film and artistic structure. I was sure that I will be doing fragments and therefore I tried to see which stories can fit and make together a good structure; a good film.

Of course not all stories that I heard can be used or knitted in the film, I even was not able to get to shoot two stories that I really wanted to include (the people already fled the house on the day of the shooting, and the other lady was too afraid ‘of secret intelligence’ to say what is happening with her).

The choice of stories was made to cover different approaches to the idea of home and its meaning in the Syrian context now. It also covered the variations of Syrians, Palestinian Syrians (with their history of moving from one country to another) and Syrians who also belong to the occupied territories since they have a very complex and deep meaning of home.

I tried as well to range between situations trying to reflect contradictions, variety leading to integration.

The film has been supported by the foundation of Heinrich Böll Stiftung – Middle East. How difficult was it to reach financial partners for the film and its topic?

I started shooting the film before seeking any financial help; for it was very important to capture the moments that were running fast in the cities: people are leaving or obliged to leave. So I depended on very basic tools and mediums especially since I was shooting in the areas which are under the control of the regime (which means I have security risks of detention).

Taking into consideration the topic and my political stands, it was impossible to seek any financial support in Syria. I headed to Lebanon where I applied to some funds and did a couple of interviews. I was determined to do the film anyway, and that was very clear to all since I already had started and would try to go on till I found a fund to accomplish.

I was lucky enough, though, to be able to convince Heinrich Böll Stiftung – Middle East with the project. They viewed the materials I had and believed in the film’s abilities and potentials. They were so collaborative and months later they called to state their full and exclusive support.

I know it must have been a very difficult process and an obstacle to have a production partner in such conditions, especially when the film is not tackling direct issues related to the revolution events.

Your previous professional experience has been linked with the film industry as well. You know the role of actress, assistant director and now you tried the role of director. HAUNTED represents your first work with the medium of documentary film. Why did you decide to use this particular film form?

As a matter of fact I do writing as well (playwriting, poetry and script writing), I work in theater and film. And I believe that the relation between theme and form carries within sometimes the genre that I will approach.

In this particular case the documentary was the sole carrier of the idea from the beginning for me. I believed that having those people saying or showing their stories is the best and most effective way… to be honest I even did not think of any other genre. Reality was so present that the documentary was even screened in my head when I started shooting, of course the freedom and the challenges of this film were also present and crucial… for the film was open to all curves dominated by day to day realities around.

What was interesting for me is that what the film will offer was real and happening, and that those Syrians are real people that anyone can identify with. It has the desire within to show different images of Syrian people who are not being numbers in statistics, dead, injured, or just wailing in front of screens. They are not masses but rather individuals who could be in any country in any time era… that is why the document was so essential to me, added to that the visualization I had of the film layers.

The winner of the Doc Alliance Selection Award will be announced on August 8 in Locarno. Along with HAUNTED there are 6 more films nominated. Do you know your competitors and how do feel in that company?

I am very happy to have HAUNTED nominated by FID Marseilles, and proud to be amongst those chosen films. I was lucky to see two of them and I think they are very good films, I hope I will have the chance to see the others which I am sure are equally interesting and competitive. I appreciate this Award and value it alongside with the nomination and of course hope to be able to proceed forward in it, for I believe in the strength and individuality of the films chosen and that is what makes me happy to be among them.

Thank you very much for your time and answers, Liwaa. Hopefully we will see you in Locarno during the ceremony of the 8th edition of the Doc Alliance Selection Award. We wish you the best of luck!

The original article was published on the DAFilms.com, April 20, 2015.

Andrea works as a PR manager of an international VoD documentary portal DAFilms.com. She is responsible for media partnerships, press releases and fresh articles/interviews from the field of international documentary and festival scene published on the website.