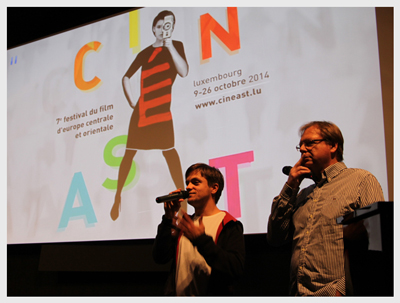 One of the mantras of the CinEast – Central and Eastern European Film Festival is to make the ‘wild east’ just a little bit more familiar by showcasing the cinema of the post-communist countries of Central and Eastern Europe (CEE). Every year the festival screens around 50-60 features and short films. Now in its 8th edition, CinEast is again looking for films made by directors from these regions. ‘Only in exceptional cases do we include films by directors from other countries and only if the movies have a strong link to the CEE countries,’ clarifies Artistic Director Hynek Dedecius. ‘This year we will also try to shine some more light on the cities of the CEE with works that reflect the theme “Urban Stories”.‘
We sat down with Dedecius and asked him some questions about cinema making in Central and Eastern Europe and why filmmakers should submit their work to the festival in Luxembourg.

Why do you have a focus on Central and Eastern Europe?

The idea of the festival goes back to 2008 when a group of expats living in Luxembourg felt an urge to give CEE cinema more visibility in their ‘new home’. Luxembourg is an incredibly multicultural, multinational and multilingual place but the culture – and especially cinema – of the countries of Central and Eastern Europe was much underrepresented. It was – and still is – virtually impossible to see a film from a CEE country in the “normal” cinema. We thought that it was a good idea to try to fill this gap because we have always believed that the cinematography from the region was of high quality and could bring different perspectives to the local cinema-goers. The totalitarian past and the turbulent years of transformation ever since the fall of the regimes are both unique experiences with huge impacts on the people, society, politics etc. And this translates into strong stories and topics that are not so common in the relatively “quiet” and stable lives of people on the western side of the former Iron Curtain. All this is obviously reflected in the CEE cinema and this is what makes the films fascinating.

Moreover, since the 2004 EU accession of many countries from the former Eastern Bloc, a lot of people from these countries came to work and live in Luxembourg. Bringing films from the region to this newly rapidly growing community thus felt quite natural. It needs to be said, however, that our target audience is not primarily the expats from the represented countries, but rather the local “Western” community. We want them to discover and better understand the cultures of the CEE countries and we would like to contribute to building bridges between the various communities. An exchange of ideas and views about the world and culture, making the “wild East” a bit more familiar… these are some of our main goals. And it is great to see that there is a real interest in our festival with audience numbers growing steadily since the first year.

Do you see any trend in filmmaking in Central and Eastern Europe? What makes these films special?

We are presenting films from around 20 countries and these are works by directors of several generations, so it is impossible to stick a single label on all of them. Yes, one can find some common elements springing up from the historical experience of the communist times and cultural and geopolitical background, but not necessarily. Each year brings a great variety of topics, genres and different cinematic approaches and we try to encompass the best selection possible of all these directions. We like diversity and showing all the different angles. It is a paradox in a way that the Eastern European cinema was more present in Western Europe during the Cold War, smuggled from behind the Iron Curtain, than after the collapse of the Berlin Wall. But with its recent international success, the cinema from the region is finally receiving more attention – and it is well deserved.

Why should a filmmaker submit to CinEast?

As films from Eastern Europe usually don’t get much attention in the region throughout the year, CinEast provides a great opportunity for CEE filmmakers to present their films to the local audiences – audiences that they wouldn’t be able to reach otherwise. We also believe that thanks to these kind of initiatives, the “Westerners” get to know us, the people originally from the “East”, and both of our cultures better. This is very important in countries like Luxembourg, where you can find so many different nationalities on every corner.

What can filmmakers expect when they are attending your festival?

Every year, we are able to invite around 20 guests (directors, producers, actors) to present their films to the audience and get valuable feedback through the Q&A sessions as well as informal talks before or after the screenings. During their visit the guests have free access to all festival screenings and events as well as the opportunity to meet local film professionals – be it independently or by attending our yearly CinEast Pro co-production workshop. The travel costs and accommodation are covered by the festival and a free guided tour around Luxembourg City is included too.

What is your experience with your first year with FilmFestivalLife?

So far, so good!  It definitely made our work much easier and more time-effective. It’s way easier just to go online and watch the films, rather than exchanging the screeners among the members of the selection committee. Neat design and everything in one place, – it makes our work easier and more efficient!

Why should filmmakers submit through FilmFestivalLife?

Well, it seems evident that submitting films in the ‘old-fashioned’ way is soon to disappear completely, so an online platform is nowadays basically a must for all festivals. Submitting through FFL guarantees that the submitted films won’t get lost somewhere on their way or in the wrong drawer. Many filmmakers might also easily get lost while trying to figure out where and when to submit their films – the number of festivals is still growing so having the possibility to use FFL’s database comes in very handy…

Submit to CinEast on FilmFestivalLife: