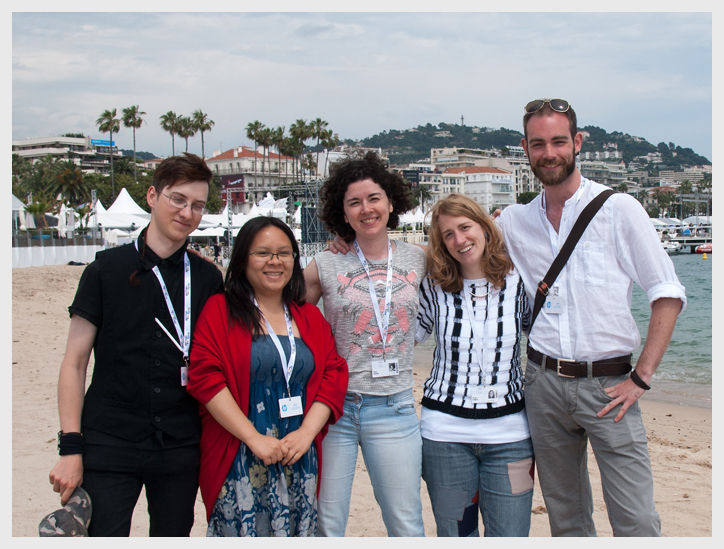 To screen a film at the Cannes Film Festival is the dream of every filmmaker. For the team behind the stop-motion short film WHOLE, it came true. The film students of the Technische Hochschule Nürnberg created a surreal drama about a couple living isolated in a yurt on the Eurasian Steppe.

After invitations from national festivals such as FilmFest Dresden, FiSH Rostock, Landshut and Regensburg, Cannes was knocking on the doors of the prodigious young students. WHOLE is a part of the Next Generation Short Tiger program. Since 1998 German Films’ Next Generation is presenting films from young German talents to international audiences.

As WHOLE was submitted to festivals via FilmFestivalLife, we’re curious to find out how the team found their way into the festival circuit. Robert Banning (director), Verena Klinger (screenwriter), Zeina Azouqah (sound design), Cam Tu Nguyen (art director) and Benjamin Vogel (art director) found some time to meet us at the beach infront of the German pavilion and talked with us about why it’s important to have a festival strategy and how they secured their tickets to festival behemoth that is Cannes. 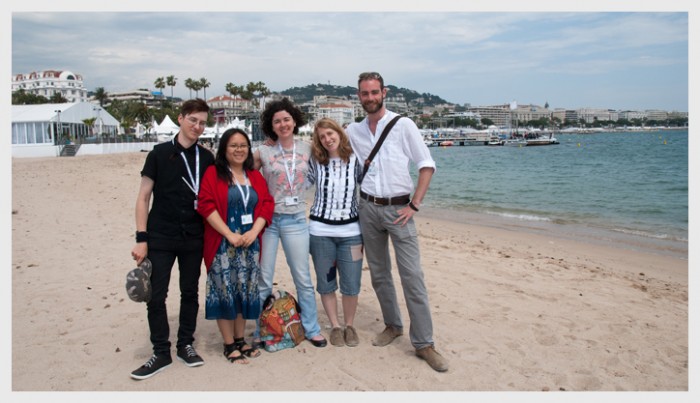 How do you strategize your festival submissions?

Zeina: I didn’t have an exact festival strategy. I worked that out after a while – for me, it was just learning by doing.

With the knowledge you have today, what would you do differently?

Zeina: I would do a bit more research about the profile of the festival, what genre’s they showcase for example, and I would also try to have more personal contact with the festivals – even calling the festival organizers when I have a question.
We had a very low-budget and we didn’t even know in the beginning that such things exist as film festival strategy partners. I just found out about it because I’ve started reading the FilmFestivalLife blog and I saw an interview with the animator Reca Bucsi – in which she said, that she gives all the work over to a strategy company. That is definitely a good idea, because it’s really a full-time job. It’s so much follow-up and paper work and so on.
Another useful thing would be when you come into personal contact with the festival organizers you can find out who does the communication for newspapers, magazine and blogs. That is also a full-time job, the PR work. If we have money we would definitely give it to a PR company. So, next time, when we plan our budget we will think about festival strategy and PR and put some money aside for this. We didn’t think about this at all. We had no special training or so.

Not even at your school?

Zeina: No, you have to be very proactive at our school, if you ask a specific question you get all the information. It would be good to have workshops for these things. We were always concentrating on the actual production, because that is also so much work. We usually make one film every semester. WHOLE took two semesters because stop-motion requires a longer pre-production phase.

Robert: As our university is not only a film school, we didn’t have funding from the school, not like at film schools like the HFF in Munich. In the beginning, we invested our own money and we had some material sponsors for glue for example, then we had a plan about what we need to buy and so on. And just at the end we said, we may have some money leftover – perhaps we can put that into festival submissions and then attending too. That was not really on our to-do list.

Zeina: We submitted mostly to festivals with no fees. And I have to say thanks to our professor Jürgen Schopper, because he is the one who submitted to the German Films’ Next Generation Short Tiger. We would never have known anything about it. He told us, ‚I’ve something in mind for you guys,‘ and he said finish as soon as possible that I can submit to it.

What are you doing in Cannes? Do you have a schedule?

Zeina: We have a Cannes guide from German Films with all the information who is here. We can just walk by the pavilions where the production companies are and ask them what they are doing. That’s the extra we get here in Cannes. But we already have enough to do with the program from German Films for every day and all these networking events.

Robert: …and not only networking events, we also have some great workshops including themes like festival strategy and all about the whole machine of Cannes and how it works.

You have a blog – what was your idea behind it?

Cam Tu: I thought the theme stop-motion is interesting to blog about and there is no German blog about it. So I thought it would be a great idea to start and share our work process.

Robert: It’s actually a good way to let people see what we’re doing. It’s one thing to tell them, that we’re doing a stop-motion project and we’re at this festival and so on. The blog is actually the first place where we can show them all about what we’re doing and then maybe get them to work with us on a different project.

Cam Tu: I think the blog can be a good source for information on how to do a stop-motion film for upcoming film teams.

Do you have any tips for filmmakers regarding the submission process?

Zeina: We just discovered today from Jana Cernik (AG Kurzfilm) that there is something called Creative Europe Desk and they do training programs for audiovisual professionals. Go to these different training programs. Try to find out more about how to market your film. You make a film and then? What do you want to do with it? Put the DVD under your bed or store it for your grandchildren? It has to come out and has to be seen by an audience, that’s why you made it.

Any advice for emerging filmmakers?

Robert:. Don’t be shy – contact people who can help you. Be it with material you need or actually funding for your film. If you see you that you are having some success, you become more interesting for companies and try to get them on board wherever it fits. Cannes is very expensive. We’re very happy to have a company called Naturstrom, they gave us a car from the company and we only have to pay a few cents per kilometer which is way cheaper than renting a car somewhere else.

What is up next for you guys?

Zeina: As a team, we don’t know. But as individuals everyone knows what to do when they are going back to Germany. Some of us have already finished film school…

Verena: I am working on my final project.

Robert: It just came to me here in Cannes. We had the people from German Films telling us about sponsorship and funding from the States and it never even came to my mind to do a second short film, because there isn’t a real market for it. But now here in Cannes I’ve opened my eyes a little bit and I see more possibilities. For me wHole was my first stop-motion film and I’m already thinking about doing another one.

Find out more on the wHole blog.

One thought on “Stop-motion in Cannes: An Interview with the Makers of ‘wHole’”