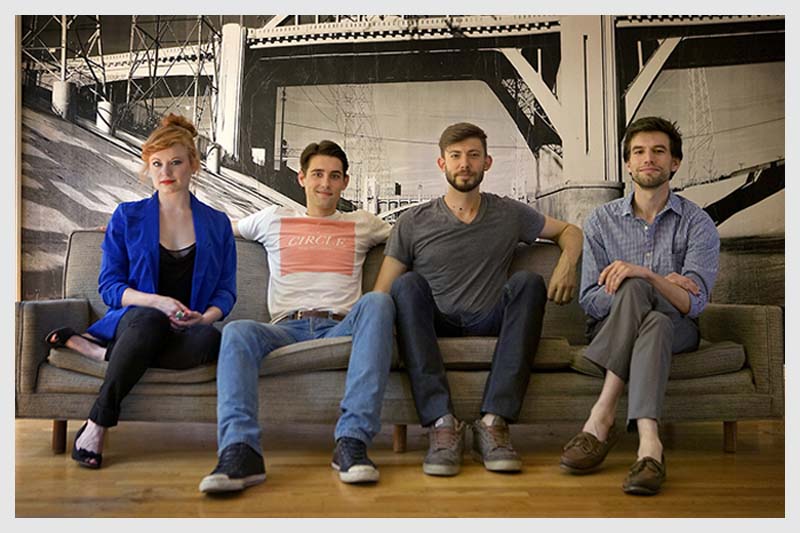 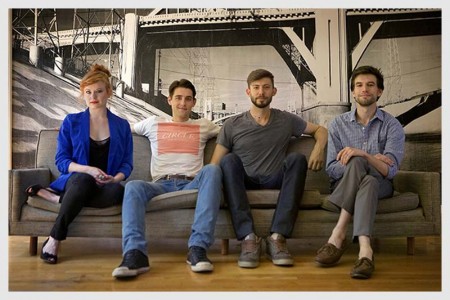 The 52nd Critics Week program featured one sole US short in competition fittingly titled THE OPPORTUNIST.

Filmmakers David Lassiter, Cate Smierciak and Alberto Roldan were heralded immediately following the Cannes section selection, hitting the front cover of the LA times as, “Cannes-do Kickstarter Spirit” and in Hollywood Reporter and Indiewire as, “The only American short in the entire Cannes Film Festival competition for 2013”.

Now spotlighted and held-up by the loving arms of Festival de Cannes, we began a conversation with the team to see what happens in the Cannes-aftermath. Where do the fantasies of featuring in Cannes competition lead to? Where to do the countless Croisette and champagne conversations end? And was Cannes the right place for LA-seeded film outfit ‘Bureau of Ships’ to launch to the screen?

Claire, FilmFestivalLife: How were the preparations leading up to THE OPPORTUNIST’s premiere?

David Lassiter: We didn’t actually finish the film until, I believe, 7 days before the premiere. I flew out to Cannes a day early and hand delivered the film to the programmers! So, I would say a great proportion of our time leading up to Cannes was actually spent making and finishing the film.

Cate Smierciak: Then, simultaneous to finishing the film we developed all of our art, all our marketing stuff, our poster, we made the trailer, we had a mad scramble for music rights and did a lot of industry and press outreach. At the same time we were developing the brand of the collective; this being our first project. So, yeah I think we were riding the wave of knocking-off everything at the very last final deadline, right up until we got on the plane.

Claire: Was the Cannes premiere at the Espace Mirimar how you imagined it to be?

David: It was actually dumping rain on the day so we didn’t know if anyone would show up, but it was pretty much a full house. We were also selected to screen first from the program so it was a little nerve racking but people seemed to respond to it. The Q and A was with the programmer who was the champion of our film who wrote a very complimentary blurb about it. Afterwards, people were actually coming up to us collectively and saying how much they loved the film – strangers would even stop us on the street occasionally.

Claire: What were your movements following the closing ceremony in terms of press, parties and planning?

Alberto Roldán: We attended parties throughout I would say!

Cate: We definitely did have some of our meetings at the very end. I had to extend my stay to another day because we had some cool opportunities. We ended up signing with a sales agent who does shorts specifically, which is a very specific market I am not totally familiar with! It is really exciting because you don’t think about selling a short film or making money out of it – it is a bonus. We also met with some really supportive angels of indie film in the U.S. scene who helped us and offered us a lot of resources: office space, connections and encouraging us to pitch for very specific sponsorship opportunities. David was also on a panel of U.S. directors at the American Pavilion which is really neat because we got a lot of attention from that.

Claire: How did the sales agent approach you?

Alberto: They reached out to us the day of or the day after the Cannes announcement.

Cate: And asked us whether they could see the film. Because it hadn’t received its World Premiere, we were very careful about it and we showed it to them once we got there, setting up a meeting while we were in Cannes. They really liked it and they ended up working with us and one other film from our section.

Claire: Since you have arrived back in LA, what parts of planning the festival run for THE OPPORTUNIST have changed?

Cate: We are now working on the rest of our festival strategy because this was the first festival we even submitted to. We are deciding on the plan for the rest of this film’s festival life is and how it will balance out with the distribution side of things.

David: We are also getting ready to push Cate’s film out into the world. She made a beautiful film in Berlin.

Cate: We are just finishing it up now actually. It is the end of a long battle. Now we are working out when we will premiere in the festival season. It will probably be in the fall. It is called CLAIRE. It is loosely based on my experiences in Berlin. The film follows the main character on her first night in a new city where she negotiates between adventurous and brave and bold and excited. So, stay tuned for that one.

Claire: What is your mix of festival and online distribution for THE OPPORTUNIST?

Alberto: Obviously the film is not a commercial vehicle. The whole point is to be able to share our love as filmmakers.

Cate: The first priority for this film is the festival circuit in terms of getting exposure and being able to meet people who literally for a living are watching films and then finding the right audiences to share the film with. It is such a great community and really, really important for us as young filmmakers. I mean we think, ‘Oh my film is going to go to X,Y and Z festival, we don’t think, ‘Oh my film is going to be on iTunes’. We have talked to people doing sales for us about holding back VOD until we hit certain festival deadlines, so it is pretty far off from now – I would say March of next year. Apparently television broadcasting rights might come a bit before that so that is part of the strategy too.

David: And this is all nice but we feel the most value from this film will come just from being able to travel around and meet face to face; just saying hello and seeing people see the film take a liking to us. On FilmfestivalLife I was just mucking around building a list. It is kind of a dream list for me. I find FilmFestivalLife to be about 50 times more usable than anything else like it online!

Claire: What is the ultimate goal for THE OPPORTUNIST in the coming couple years on the circuit?

Cate: Our goal is to have a festival identity, hoping that when we have enough people that like it that when we release a feature, people can identify us with it.

David: Yes, so 8 or 9 years after we went to school together, (laughs) I think we all have the enthusiasm and tenacity to question and push ourselves. The value of the time right now is to get all 3 of us out there both as a team and as individuals. We would all love to make features and to have them playing in competition at Cannes but I think it is very much about finding our own way and becoming sustainable as filmmakers.

Claire: Would you go through Kickstarter again or more traditional funding routes?

Cate: I think our first step for our next project for funding is to speak to some of the people we have met in the past few weeks at Cannes and see how they might like to get involved. I think we have this really good opportunity and luxury at the moment to have people’s ears who will help us in more of an efficient way than Kickstarter can. This is not the only option anymore because of Cannes. That is what is different for the future for us now.

David: Given how much it trades in fantasies, Cannes was very interesting. Especially as a filmmaker with a film in competition, Cannes took such great care of us. They just had such a robust program for us which involved meeting the other filmmakers, who are all amazing in their own right. From parties to lunches to everything else, I do feel like we kind of got really special treatment for our first time.

Claire: And lastly can you tell me about the music rights?

CATE: Yes, it was a day before Cannes when we finally got in touch with the right people. In the clutch, Gessaffelstein and Brodinski – the actual musicians – watched the movie. They were like, ‘This will be so great, we are so excited to be a part of this and not only can you use the music but also we are going to be in Cannes’! One thing led to another and they played a show and invited us there and got us a table and a bottle of champagne!

David: The music was really a huge jumping off point for creating the world so to meet have them be so supportive was a very, very strange reversal of gratitude!

“The Opportunist” Trailer from David Lassiter on Vimeo.

:: A talk with Jane Campion: ‘TOP OF THE LAKE’, Cannes, female filmmakers and Harvey Keitel
:: Ari Folman’s new road to ‘THE CONGRESS’: Filmmaking after his first major success