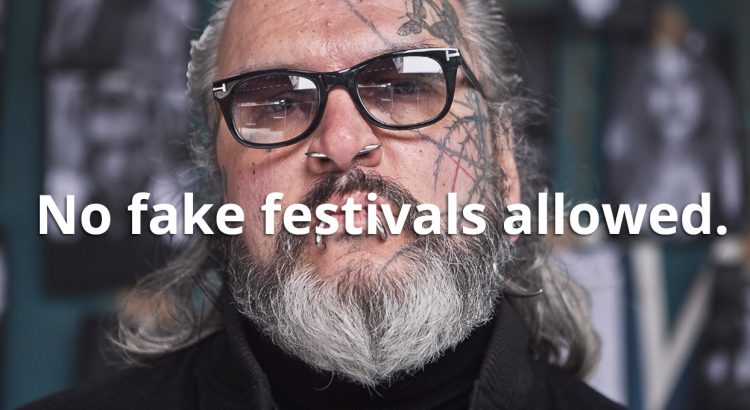 In the last few years, there has been a rise in the number of film festivals that seemed suspicious and were opening their Call for Entries on Withoutabox and Film Freeway.
We felt it was time to strike back.

This is why we launched the Fair Submissions Code of Ethics with our partner submission platforms Festhome, Reelport, Shortfilmdepot and Uptofest – in order to protect our filmmakers from illegitimate festivals.

Did you see the Code already?

Here at FFL, we’re based in Berlin. All Berliners know about the famous Sven Marquardt (see above), the bouncer at the world-famous Berghain – a club with one of a strictest door policies in the world. However, rather than their somewhat capricious, superficial policy towards admittance, we’re quite clear-cut with ours.

How do we validate festivals

If festivals have a clear track record, industry relevance and they are with all the relevant information, they’re in They’ve received the ‘validated’ stamp. Some, who didn’t fulfill all the conditions of our strict criteria but should still be allowed to open for submissions on FFL – will receive the ‘not validated’ stamp. Then there are those which we don’t list on the platform whatsoever, who are definitely not legitimate film festivals.

Take a look at the validated festivals on our platform, all of whom are well-worth a submission.

We care about our filmmaking community. Our CEO, Luca Zamai, was once a filmmaker on the circuit. After all the blood, sweat and tears of the filmmaking process, we understand that there is nothing worse that spending money on submissions that don’t result in your film being seen.

5 Warning Signals a Film Festival is not legitimate

Here’s some more useful resources if you want to know more:

One thought on “How to spot a fake film festival”